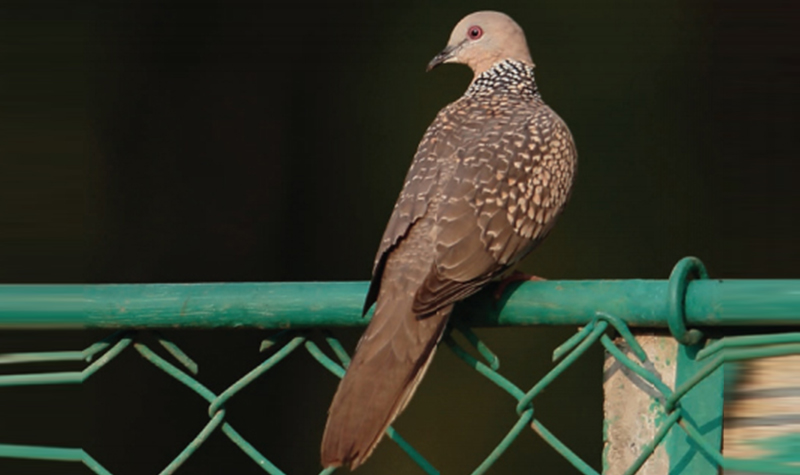 The Spotted Dove (Spilopelia chinensis) is a small and somewhat long-tailed pigeon that is a common resident breeding bird across its native range on the Indian subcontinent and Southeast Asia.
This dove is long tailed buff brown with a white-spotted black collar patch on the back and sides of the neck. The tail tips are white and the wing coverts have light buff spots.
There are considerable plumage variations across populations within its wide range. The species is found in light forests and gardens as well as in urban areas.
They fly from the ground with an explosive flutter and will sometimes glide down to a perch. It is sometimes also called the Mountain Dove, Pearl-necked Dove, Lace-necked Dove, or Spotted Turtle Dove.
The Spotted Dove in its native range in Asia is found across a range of habitats including woodland, scrub, farmland and habitation. In India, it tends to be found in the moisture regions, with the Laughing Dove (S. senegalensis) being commoner in the drier areas. These doves are mostly found on the ground where they forage for seeds and grain or on low vegetation Spotted Doves move around in pairs or small groups as they forage on the ground for grass seeds, grains, fallen fruits and seeds of other plants. They may however take insects occasionally and have been recorded feeding on winged termites. The flight is quick with regular beats and an occasional sharp flick of the wings. A display flight involves taking off at a steep angle with a loud clapping of the wing and then slowly gliding down with the tail spread out.