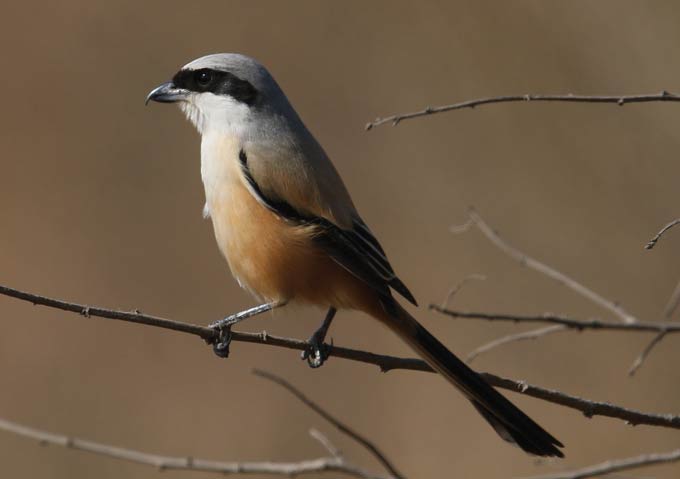 Shrikes are medium-sized birds, up to 50 centimeters (20 in) in length, with grey, brown, or black and white plumage. Their beaks are hooked, like that of a bird of prey, reflecting their predatory nature, and their calls are strident.
Shrikes are known for their habit of catching insects and small vertebrates and impaling their bodies on thorns, the spikes on barbed wire fences, or any available sharp point. This helps them to tear the flesh into smaller, more conveniently sized fragments and serves as a cache so that the shrike can return to the uneaten portions at a later time. This same behavior of impaling insects serves as an adaptation to eating the toxic lubber grasshopper, Romalea microptera. The bird waits for one to two days for the toxins within the grasshopper to degrade, then they can eat it.
Shrikes are territorial, and these territories are defended from other pairs. In migratory species, a breeding territory is defended in the breeding grounds and a smaller feeding territory is established during migration and in the wintering grounds. Where several species of shrike exist together, competition for territories can be intense.
Shrikes make regular use of exposed perch sites, where they adopt a conspicuous upright stance. These sites are used in order to watch for prey items and to advertise their presence to rivals.