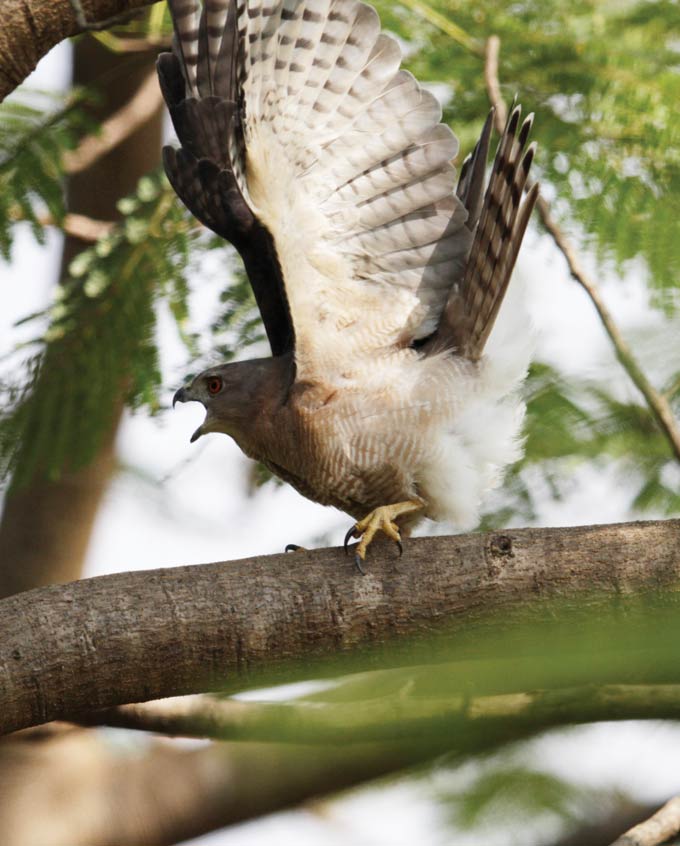 The Shikra (Accipiter badius) is a small bird of prey in the family Accipitridae found widely distributed in Asia and Africa where it is also called the Little Banded Goshawk. The African forms may represent a separate species but have usually been considered as subspecies of the shikra. The Shikra is very similar in appearance to other sparrow-hawk species including the Chinese Goshawk and Eurasian Sparrow-hawk. They have a sharp two note call and have the typical flap and glide flight. Their calls are imitated by Drongos and the common Hawk-cuckoo resembles it in plumage.
The Shikra is found in a range of habitats including forests, farmland and urban areas. They are usually seen singly or in pairs. The flight is typical with flaps and glides. During the breeding season pairs will soar on thermals and stoop at each other. Their flight usually draws alarms among smaller birds and squirrels. They feed on rodents (including Meriones hurrianae), squirrels, small birds, small reptiles (mainly lizards but sometimes small snakes) and insects. Small birds usually dive through foliage to avoid a Shikra and a Small Blue Kingfisher has been observed diving into water to escape. Babblers have been observed to rally together to drive away a Shikra. They will descend to the ground to feast on emerging winged termites, hunt at dusk for small bats (such asCynopterus sphinx) and in rare instances they may even resort to feed on carrion.