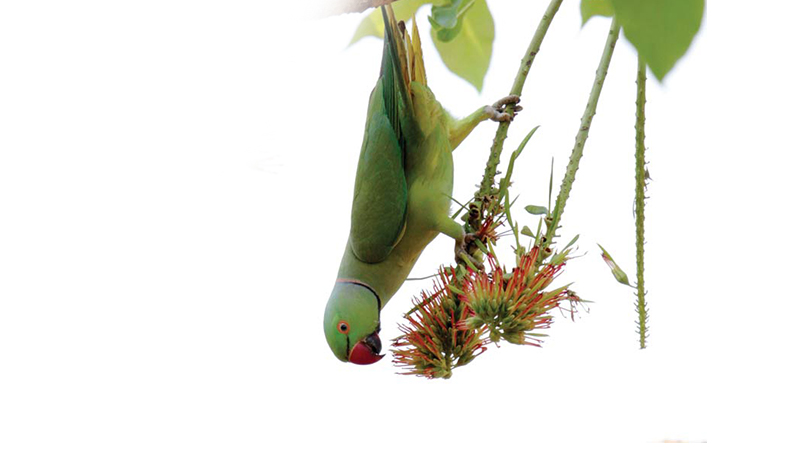 The Rose-ringed Parakeet (Psittacula krameri), also known as the Ring-necked Parakeet, is a gregarious tropical Afro-Asian Parakeet species that has an extremely large range.
In the wild, this is a noisy species with an unmistakable squawking call, and captive individuals can be taught to speak. It is herbivorous and not migratory. One of the few parrot species that have successfully adapted to living in disturbed habitats, it has withstood the onslaught of urbanization and deforestation.
Rose-ringed Parakeets usually feed on buds, fruits, vegetables, nuts, berries, and seeds. Wild flocks also fly several miles to forage in farmlands and orchards, causing extensive damage. In India, they feed on cereal grains, and during winter also on pigeon peas. In Egypt during the spring, they feed on mulberry and in summer they feed on dates and nest inside palm trees and eat from sunflower and cornfields.
In captivity, Rose-ringed Parakeets will take a large variety of food and can be fed on a number of fruits, vegetables, pellets, seeds, and even small amounts of cooked meat for protein. Oils, salts, chocolate, alcohol, and other preservatives should be avoided.