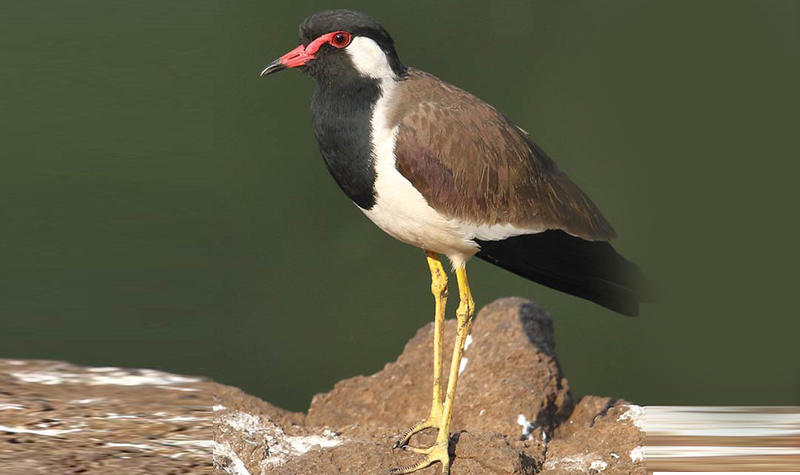 The Red-wattled Lapwing (Vanellus indicus) are ground birds that are incapable of perching. Their characteristic loud alarm calls are indicators of human or animal movements and the sounds have been variously rendered as ‘did he do it’ or ‘pity to do it’ leading to the colloquial name of did-he-do-it bird. Usually seen in pairs or small groups and not far from water, they sometimes form large aggregations in the non-breeding season (winter). They nest in a ground scrape laying three to four camouflaged eggs. Adults near the nest fly around, diving at potential predators while calling noisily. The cryptically patterned chicks hatch and immediately follow their parents to feed, hiding by lying low on the ground or in the grass when threatened Red-wattled Lapwings are large waders, about 35 cm long. The wings and back are light brown with a purple to green sheen, but the head, a bib on the front and back of the neck are black. Prominently, a white patch runs between these two colours, from belly and tail, flanking the neck to the sides of crown. Their short tail is tipped black. It has a red fleshy wattle in front of each eye, black-tipped red bill, and it’s long legs are yellow. In flight, prominent white wing bars are formed by the white on the secondary coverts.