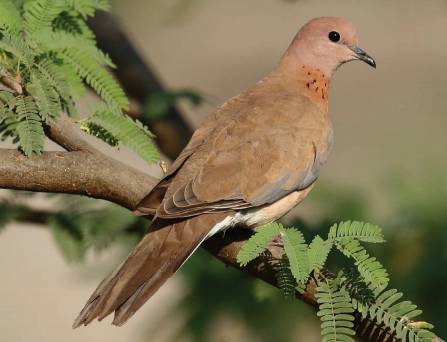 The Laughing Dove (Spilopelia senegalensis) is a small pigeon that is a resident breeder in Africa, the Middle East and the Indian Subcontinent. This small long-tailed dove is found in dry scrub and semi-desert habitats where pairs can often be seen feeding on the ground. A rufous and black chequered necklace gives it a distinctive pattern and is also easily distinguished from other doves by its call. Other names include Laughing Turtle Dove, Palm Dove and Senegal Dove while in India the name of the Little Brown Dove is often used. It was introduced in Western Australia and has established itself in the wild around Perth and Fremantle. It is a common and widespread species in scrub, dry farmland and habitation over a good deal of its range, often becoming very tame. The chuckling call is a low rolling croo-doo-doo-doo-doo with a rising and falling amplitude.