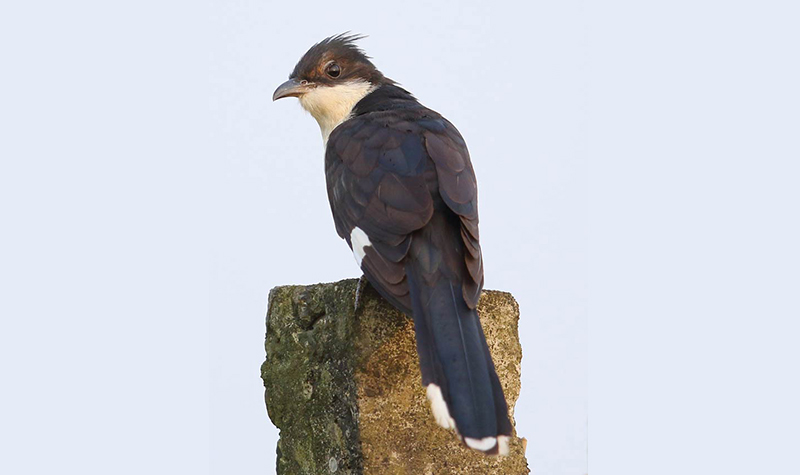 The Jacobin Cuckoo, Pied Cuckoo or Pied-crested Cuckoo (Clamator jacobinus) is a member of the cuckoo order of birds that is found in Africa and Asia. It is partially migratory and in India, it has been considered a harbinger of the monsoon rains due to the timing of its arrival. It has been associated with a bird in Indian mythology and poetry, known as the ‘Chatak’, represented as a bird with a beak on its head that waits for rains to quench its thirst.
This medium-sized, slim black and white Cuckoo with a crest is distinctive. The white wing patch on the black wing and the pattern make it unmistakable even in flight. They are very vocal during the breeding season. The call is a ringing series of whistling notes “piu-piu” with the calls of the nominate form more rapid and slightly mellower.
In India the subspecies serratus (Sparrman, 1786) is a summer breeding visitor to northern India and is believed to migrate to southern Africa. This is larger and longer winged than the nominate subspecies found in the southern peninsular region and Sri Lanka is said to be a local migrant. No ringing evidence exists to support the actual migration to Africa.