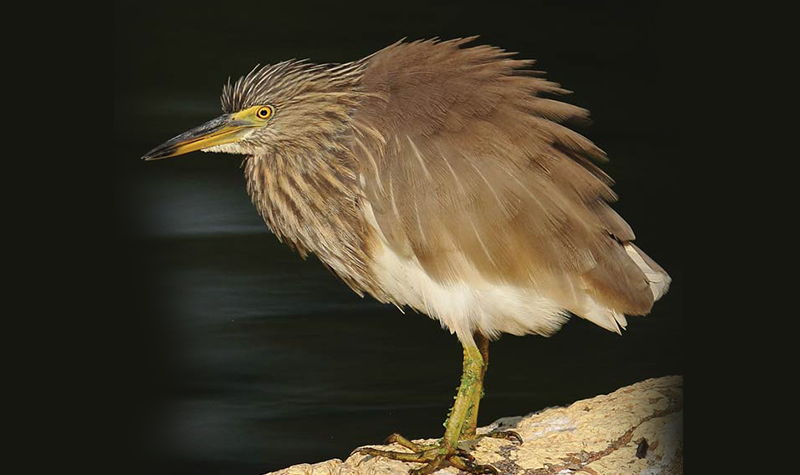 The Indian Pond Heron or Paddybird (Ardeola grayii) is a small heron. They are widespread and common but can be easily missed when they stalk prey at the edge of small water-bodies or even when they roost close to human
habitations. They are however distinctive when they take off with bright white wings flashing in contrast to the cryptic streaked olive and brown colours of the body. Their camouflage is so excellent that they can be approached closely before they take to flight, behavior that has resulted in folk names and beliefs that the birds are short-sighted or blind.
They are very common in India and are usually solitary foragers but numbers of them may sometimes feed in close proximity during the dry seasons when small wetlands have a high concentration of prey. They are semi-colonial breeders. They may also forage at garbage heaps. During dry seasons, they sometimes take to foraging on well-watered lawns or even dry grassland. When foraging, they allow close approach and flush only at close range. They sometimes form communal roosts, often in avenue trees over busy urban areas.
The Indian Pond Heron’s feeding habitat is marshy wetlands. They usually feed at the edge of ponds but make extensive use of floating vegetation such as water hyacinth to access deeper water. They may also on occasion swim on water or fish from the air and land in deeper waters. They have also been observed to fly and capture fishes leaping out of water.