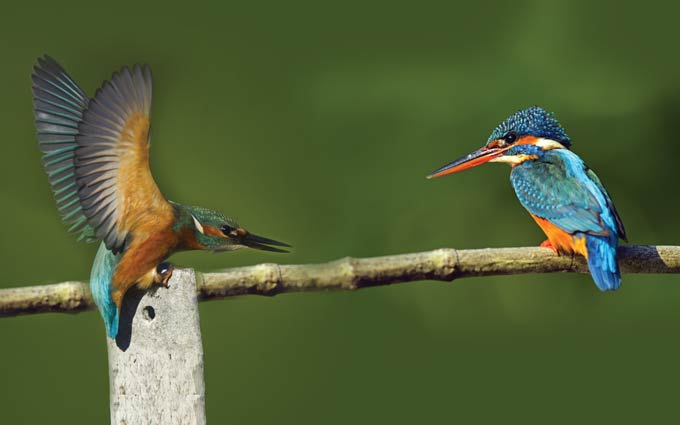 The Common Kingfisher (Alcedo atthis) also known as the Eurasian Kingfisher, and River Kingfisher, is a small Kingfisher found across Eurasia and North Africa. It is resident in much of its range, but migrates from areas where rivers freeze in winter.
This sparrow-sized bird has the typical short-tailed, large-headed Kingfisher profile; it has blue upper parts, orange under parts and a long bill. It feeds mainly on fish, caught by diving, and has special visual adaptations to enable it to see prey under water. The glossy white eggs are laid in a nest at the end of a burrow in a riverbank.
Common Kingfishers are important members of ecosystems and good indicators of freshwater community health. These habitats have also the highest quality of water, so the presence of this bird confirms the standard of the water.
Like all Kingfishers, the Common Kingfisher is highly territorial; since it must eat around 60% of its body weight each day, it is essential to have control of a suitable stretch of river. It is solitary for most of the year, roosting alone in heavy cover. If another Kingfisher enters its territory, both birds display from perches, and fights may occur, in which a bird will grab the other’s beak and try to hold it under water